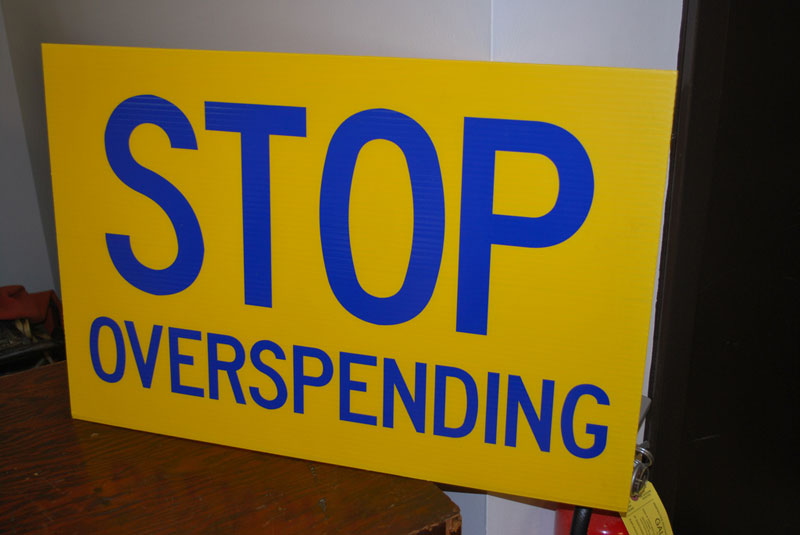 Every year, losing weight becomes one of the top New Year’s resolutions made by Canadians. But let’s face it – the only thing getting slim around the holidays is our wallets.

According to RBC’s annual 2016 Post-Holiday Spending Poll, the number of shoppers going over budget during the festive season continues to grow. In fact, 41 per cent of Canadians said they overspent their budget last year, compared to 33 per cent in 2011.

What’s more, the majority of Canadians (44 per cent) don’t plan on doing anything differently this year in terms of saving (or not saving) money ahead of their holiday shopping – even when they should.

An Ernst and Young report predicts that holiday retail sales are expected to jump 3.5 per cent in 2016. According to the data, the increase is correlated with the depreciation of the Canadian dollar, forcing shoppers to pay more on some products.

Money was no object for Canadians during the 2015 holiday season as they overspent by $397 on average.

While Canadians between 18 and 34 were more likely to go over budget, it was the over 55 age group who overspent more than anyone else. In fact, they overspent by an average of $512 each (young Canadians overspent by $362 dollars each).

Here’s a closer look back on how Canadians spent their cash during the 2015 holiday season:

Maria Contreras, director of savings at RBC, who offered up some helpful tips on how you can avoid the crippling Christmas debt and start the New Year off on the right financial foot.

The holidays might be sneaking up on us quickly, but setting aside some savings now could help you quite a bit.

It’s often the small steps that can make the biggest difference, Contreras says.

Bringing a lunch or a thermos of coffee or tea to work can give your savings a boost, even in the few weeks now left ahead of the holiday season.

Contreras advises shoppers to open up a second savings account dedicated to holiday shopping. This way, she says, it’s easier to allocate money.

See how much you can contribute between now and when your holiday shopping begins in earnest, says Contreras.

For longer term savings for special expenses, such as the holiday season each year, the ‘pay yourself first’ approach can help you set aside savings each month. Do this each pay day. Setting it up online to make this automatic is most effective.

3. Keep track of what you spend

Before you head out the door, make a list of all the spending you plan to do and compare it with the amount of money you’ll have access to, Contreras says.

The tried and true savings techniques – planning and budgeting to keep track of spending – aren’t exciting but they work, she says.

By noting down the numbers, you’ll be more aware of which expenses are ‘need to do’ versus those which are ‘nice to do if possible,’ to help you keep your expenses in check.

A growing trend among shoppers is the use of rewards points. According to RBC, 51 per cent of Canadians who collect points redeemed their rewards last year. This helped save shoppers an estimated $206 each.

But don’t just settle on the standard amount of points.

Double dip your points – or triple or even quadruple, says Contreras.

If you use a rewards credit card, don’t settle for earning the standard amount of points on each purchase. Understand which bonus point offers exist and take advantage of them when shopping.

And if you use a credit card for purchases or ongoing expenses, Contreras advises to consolidate that spending on a credit card that earns you rewards points.

“Pay off your credit card balance every month and use the points you’ve earned for any additional purchases,” she says.

5. Cash in on those perks

Because of the competitive credit card market, many credit card providers offer extra incentives to thank you for your business, especially around the holiday season.

Contreras advises clients do their research and to see what each credit card has to offer. This could be anything from valet parking at certain malls to gift wrapping and coat and parcel check and more.