On April 30, 2015, the Honourable Greg Dewar presented his first budget as Minister of Finance. The government will delay its plans to balance its budget in 2016-17, and will instead continue with spending in priority areas in order to invest in infrastructure, create jobs and strengthen services. 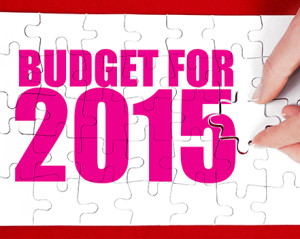 The federal and Manitoba top marginal rates for non-eligible dividends are as follows:

The combined federal and Manitoba top marginal tax rates on income other than non-eligible dividends for 2015 are as follows:

The combined federal and Manitoba top marginal tax rates on income other than non-eligible dividends for 2015 are as follows: 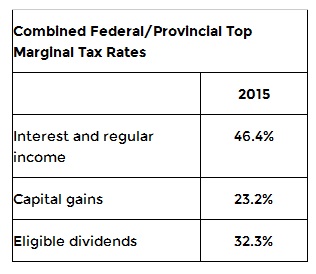 The tax credit was introduced in 2009 and enhanced in 2011, to provide recognition and financial supports to Manitobans who serve as volunteer primary caregivers to assist care recipients to live independently in their own homes.

One volunteer caregiver can claim up to 3 care recipients at one time, for a potential maximum annual tax credit of $4,200. The credit is claimed on the volunteer primary caregiver’s income tax return and is not income tested.

The budget extends the eligible investment period for the Community Enterprise Development Tax Credit to the first 60 days following the end of the calendar year, beginning January 1, 2015 for the 2014 calendar year.

As a result, a shareholder who makes an eligible investment through a qualifying trust that is a registered retirement savings plan can elect to retroactively claim the tax credit in the same taxation year as the deduction for the plan contribution.

The budget introduces a tax credit for eligible Manitobans who perform at least 200 hours of combined volunteer firefighting and volunteer search and rescue services in a year.

As well, the eligibility criteria for senior homeowners will be broadened to include seniors who occupy their principle residence and pay school taxes.

This change will benefit seniors who don’t own their residence but pay school taxes. In addition, a legal representative will be able to apply for the rebate on behalf of the senior homeowner.

The maximum tax credits amounts and actual Manitoba tax credits for 2014 and 2015 are set out below: 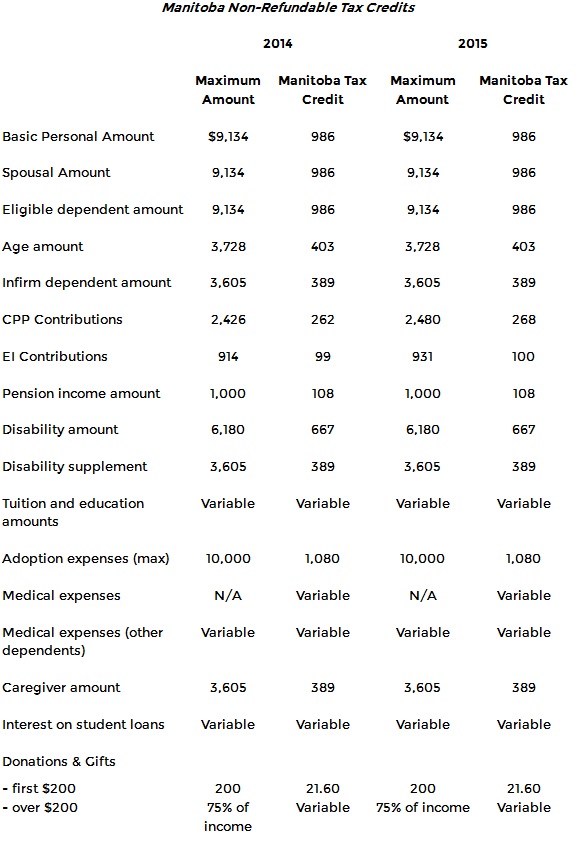 In general, credits are multiplied by 10.8% to arrive at the deduction from Manitoba Tax. In the case of donations and gifts over $200, the credit is 17.40%

The budget did not announce any changes to the corporate tax rate. 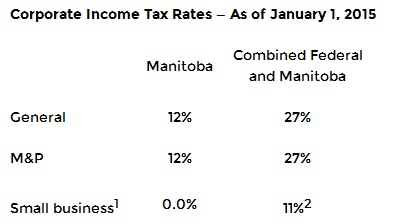 With the aim to promote more paid work and on-the-job training opportunities for students, today’s budget proposes to both enhance and expand the Co-op Students Hiring Incentive and the high school apprentice component of the CEATC.

The budget expands eligibility for these fully refundable credits to include eligible employers who hire a student in a wide range of registered high school vocational programs that are not connected with the apprenticeship system (e.g., programs in health care, child care, business and hospitality).

This refundable tax credit for high school co-op students is worth 25% of eligible wages and salaries, up to a lifetime maximum of $5,000 per student.

The budget increases the benefits as follows:

The budget proposes to extend the eligible investment period for the Community Enterprise Development Tax Credit to the first 60 days following the end of the calendar year, commencing January 1, 2015, with respect to the 2014 taxation year.

The credit was introduced in 2002 to encourage Manitobans to invest in local enterprises.

This will allow a shareholder who makes an eligible investment through a qualifying trust that is an RRSP to elect retroactively to claim the tax credit in the same taxation year as the deduction for the related contribution.

The budget enhances the non-refundable Small Business Venture Capital Tax Credit by increasing the maximum number of employees to 100 (from 50) and broadening the list of eligible business to include non-traditional farming ventures and brew pubs.

The credit is intended to encourage resident individuals and companies to acquire equity capital in emerging enterprises that require larger amounts of capital than community ownership can provide.

These changes take effect for eligible shares issued after April 30, 2015.

The budget broadens the Data Processing Investment Tax Credit and the Data Processing Equipment Investment Tax Credit to include new data processing centres built in Manitoba and leased to another Manitoba company that is not affiliated with the lessor and will be made available to taxpayers’ data processing centres built using a business structure other than a corporation.

The budget also extends the credits to the end of 2018 (from 2015). This refundable income tax credit is equal to 4.5% of the capital cost of new qualified property that is a building, and 8.0% of the cost of qualified machinery or equipment.

In 2012 the Data Processing Investment Tax Credit was introduced as a means of positioning Manitoba as a high technology data processing location of choice.

In 2013, an additional credit, the Data Processing Equipment Investment Tax Credit, was introduced to encourage companies not currently engaged in data processing in Manitoba to make a significant incremental capital investment in data processing equipment in the province.

The budget extends the period for which unused Research and Development Tax Credits can be carried forward after they are earned to 20 years (from 10 years).

Corporations who carry on eligible scientific research and experimental development in Manitoba are eligible for a 20% Research and Development Tax Credit which can be applied against Manitoba corporate income tax payable in the year earned, with unused credits currently available for a 10 year carry forward and a 3 year carryback.

The budget expands the Green Energy Equipment Tax Credit to include biomass fuel energy equipment installed in Manitoba and used in a business. The tax credit rate will be 15%.

The budget increases the Corporation Capital Tax on banks, trust corporations and loan corporations to 6% (from 5%), beginning for taxation years ending after April 30, 2015.

Other Measures (Not related to income tax)

The following chart compares top personal and corporate tax rates and sales taxes for all provinces and territories, as announced to April 30, 2015. 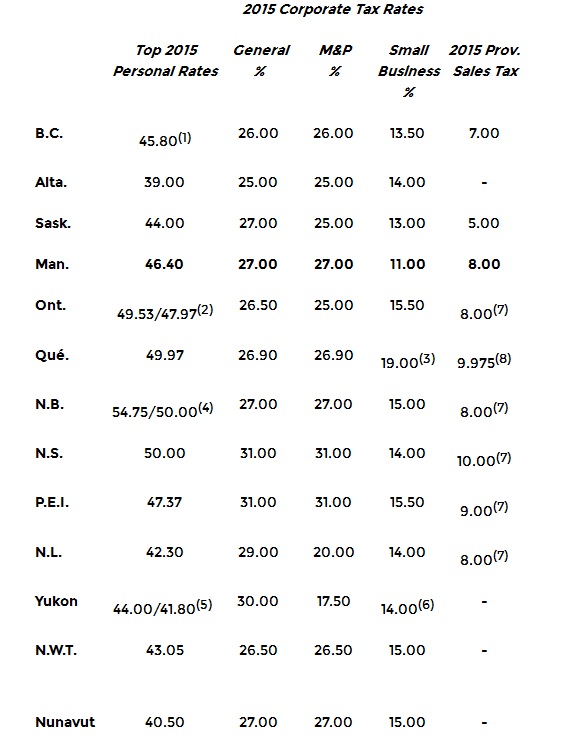