In an economy that is still, quite obviously, recovering from the downturn in 2008 the unemployment rate across the country has proven to be a roller coaster ride.

Despite adding a reported 26,200 jobs in August the unemployment rate is still climbing to levels that have been seldom seen.

The boon in August was severally offset by the loss of over 31,000 jobs in July and the full number now hovers around 7% unemployment which is up from the 6.9% in July.

Expectations were that the strong showing in august and the expected gain of a further 15,000 jobs would have held the rate steady at 6.9% but this prediction unfortunately did not materialize. 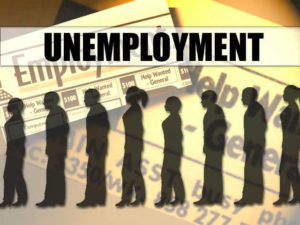 Canada’s overall jobs picture has been quite volatile over the past year with quite a few more part time and temporary positions being added as opposed to full time positions with benefits and other incentives.

The part time jobs added were significantly higher however, 113,100 part time gigs have been added to the job roster in the same time period.

This certainly highlights the trend of companies to hire only part time or temporary employees in order to avoid, as some suggest, paying out benefits and incentives that are traditionally given to full time employees.

The gains that were experienced in August notwithstanding the overall outlook are considered to be far below what expectations were based on the numbers from 2015.

The overall average in new job creation was around 13,000 per month in 2015 and the course for this year would be approximately 8000 jobs per month a disappointing reduction to be sure.

Still, the Edmonton area’s numbers remained healthier than Alberta as a whole, which saw the jobless count rise to 8.6 per cent — the highest rate in the province since September 1994.

The provincial unemployment rate a year ago was 6.2 per cent.

While the worsening numbers are alarming, University of Calgary economist Trevor Tombe said there is no evidence of any broad weakness in the labor force.

He said the major reason for the increased unemployment rate was not a substantial loss of jobs, but rather a growing workforce in Alberta. Workforce numbers turn on how people answer Statistics Canada surveyors, such as students or retired people — normally not counted in workforce tallies — responding that they want to work, Tombe said.

On the other end if we talk about Calgary, the unemployment rate climbed almost a full percentage point in October 2016, making it the highest in Canada for the fourth straight month.

According to Statistics Canada’s latest jobless numbers recently released, the unemployment rate in the oil and gas hub was 10.2 per cent last month compared with 9.5 per cent in September – the worst among the 33 metropolitan areas surveyed.

It’s also the fourth straight month that Calgary’s unemployment numbers have climbed; in July 2016 the city’s rate sat at 8.6 per cent. In August, it climbed to 9 per cent.

But if we talk about whole Canada here is good news; according to Statistics Canada, the economy gained 44,000 net new jobs in October 2016 but the gains were entirely in part-time employment.

The overall increase was driven by 67,000 additional part-time jobs for the month, while the number of full-time jobs fell by 23,000.

The unemployment rate held steady at 7.0 per cent as more people entered the labor market.

Economists had expected a loss of 10,000 jobs overall and the unemployment rate to remain unchanged, according to Thomson Reuters.

The increase in October follows a gain of some 67,000 jobs in September 2016 that saw gains in both part-time and full-time work. 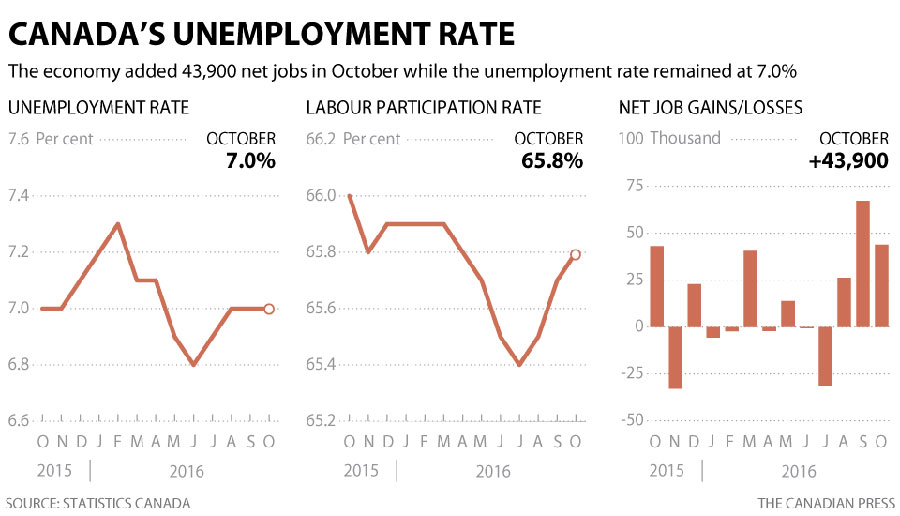 For October 2016, the goods-producing sector gained nearly 21,000 jobs, boosted by a gain of 24,000 in the construction industry. The natural resources sector also gained 10,000 jobs, its first notable increase since March 2015.

The services-producing sector added more than 23,000 jobs as wholesale and retail trade jobs climbed 19,000 and the “other services category” increased by 18,000. The educational services group climbed by 16,000.

Ontario gained 25,000 jobs in October, while British Columbia increased 15,000. The number of jobs in Newfoundland and Labrador fell by 5,600.

Statistics Canada also reported that Canada’s trade deficit hit a record $4.1 billion in September due to the import of a component for the Hebron offshore oil project in Newfoundland and Labrador. Economists had expected a deficit of $1.7 billion for September 2016.

Imports rose 4.7 per cent to a record $47.6 billion in the month as import prices gained 2.4 per cent and volumes increased 2.3 per cent.

The plan by the Trudeau administration to increase jobs with the capital expenditure program of rebuilding the crumbling infrastructure around the country has quite obviously not yet had the impact on the job market that the administration had hoped or expected.

It remains to be seen if going forward that plan will have the effect that Trudeau hopes in lifting the economy and creating more full time and sustainable jobs.